skip to main | skip to sidebar

I have tried and am unable to move away from the cancer topic. This blog just never felt comfortable and I've decided to shut her down.

I've gone back to my original blog www.trustmeitsnothing.blogspot.com

A few posts have been made there already. I'll be staying there indefinitely.

My brain she ain't what she used to be. Sorry for the wishy-washy
Posted by Sheri at 4:50 PM 4 comments: 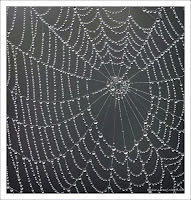 This is supposed to be my happy, cancer-free blog, but it's not. This is me trying not to panic anyone, because I don't want that. But I have a lump. It's hard, unmoving and about the size of ... well, in my mind, a bowling ball, but that's probably incorrect. You see, it's 4am and I've not been to sleep yet. I got about two hours of sleep last night and less the night before. My doctor gave me pills to help me sleep, though I've not taken them. Duh, I should. I don't like sleeping pills; I always feel sluggish the next day.

Anyway! Back to the lump. I've been feeling a tightening under my skin in my chest area the last few weeks and I figured it was just scar tissue. After researching mastectomy scar tissue online, I now doubt very much that's what it is. It's been seven months since my mastectomy...there shouldn't be any new scar tissue forming. Ok, so what is it? I don't know. I could have asked the doctor about it on Friday, but I was too scared. This is my first mention of it at all. I haven't even told Tom.

Let me see if i can describe what is going on in my head... Try to imagine walking through the jungle and believing there are spiders everywhere. Now even if you're not scared of spiders, you've been told there's a chance one is going to jump out and bite you. You've been bitten before and you know how painful it is. You know that if you get bitten again what happens to your life - you create a domino effect - it's almost as if that spider's poison is passed on from one person to the next. Oh, and not just any people either! Heavens, no. Your spider bite affects the lives of all the people you love. You need to keep walking, but you are jumpy and fretting the whole time. Right now I'm frozen in one place, because I'm too scared to keep going.

Writing about this lump made it real. Come sun up I'll call Dr Young. Let's have her pat me on the arm and send me home with a "trust me, it's nothing".
Posted by Sheri at 12:53 AM 9 comments:

Beavers and other Scary Creatures 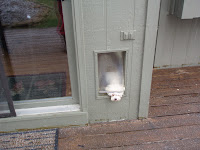 In our backyard here we have an ample supply of wild animals. You know like frogs and rabbits and opossums. But the worst one of all is our backyard raccoon. We all hate Coony, with the possible exception of Spike, who seems to not be bothered by Coony at all. A wonderful guard dog if there ever was one. Here's our first encounter with Coony:

I was going through the heart of my chemo and was, of course, very sick. My dad was in town helping out. Tom and Dad were in the living room watching tv and chatting when they hear what sounds like Spike either going in or out of the doggy door. Now, I should point out that when Spike needs to go outside, he just quickly jumps through the door. On this particular night - Tom said it sounded like Spike just couldn't make up his mind. He'd start to go in, change his mind and go back out. Of course, all Tom could hear was the clicking of the doggy door plastic.

Finally after 5 minutes of indecision Spike comes in. After that Dad and Tom hear some munching going on at the ol dog food bowl. Once the meal was done, it was time to head back outside and more indecision of in or out with the doggy door. It was at THIS time that the crack detective team of Dad and Tom decide something just ain't right. Spike ALWAYS goes straight in or out - why wasn't he this time? So, Tom decides he's going to stand up and investigate the matter. When Tom stood up he saw a beast of an animal going half way through our doggy door. (While Spike would tell you he himself is a beast, in reality he's a 7lb Maltese, who obviously is as good at watching the house from intruders as Dad and Tom.)

Tom only caught a glimpse of the animal so his first guess was that it was an opossum. I'm thoroughly grossed out when I hear the story. This animal casually came into my house with people less than 10 feet away. He ate all the dog food, tried to dig into the bag of dog food that was sitting in the kitchen and the only reason he left was because he was full or bored. He didn't leave because a silly human scared him off. He didn't leave because a dog was angry that another animal was eating his food. No, he left because he was done.

Now when the sun starts going down, we have to remember to lock up the doggy door, because our night creature knows that inside our house is a wonderful source for food. Of course locking the doggy door on an animal with a brain the size of a pea isn't all you need to detoured the creature. Every night after that we hear first a loud THUMP as he tries to run through the locked doggy door. After that it's non stop little thump, thump, thump, thump while creature bangs his head against the door in an attempt to get it to open again. That thump thump sound in the middle of the night? CREEEPY!

Tom finally saw it bright and clear one night after it gave up on trying to get in. The world's biggest raccoon turns around and sits on the deck and stares up at Tom who is staring down at him. It was at this time that animal control was called. Here's how animal control works: if you have a raccoon INSIDE your house, they will happily come out and catch the varmint for you... outside your house? You're on your own! Helpful!

Here is the best story I've ever read about catching the wild animals of the night: It is by a wonderful blogger name TexasHolly I hope you read and enjoy.
Posted by Sheri at 3:34 AM 2 comments: 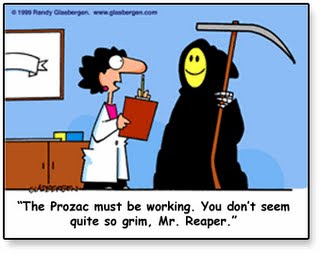 Whilst at the doctor on Friday she suggests that I talk to one of the cancer councilors. I guess having cancer is supposed to mess with you or something. That's fine that SOME people can't cope, but that doesn't mean I can't. I'm fine. FINE, I tell you!

I'll give you some examples of how fine I am:

*True I have to be pulled out of the house kicking and screaming, but I don't see the point in leaving. Everything I need is here.

*While home, I believe in being as comfortable as possible. Where's a person most comfortable? In bed. So, I ask you - is it really so wrong that I spend all my time in bed? I think not either.

*Cooking is for sissies. Back in the old days people had to forage for their food. I'm teaching my family good hunting and gathering techniques.

*I never return phone calls. Ok, now, this one is kind of shaky, because I always was sorta sucky at returning calls. And being the first one to call? Forgetaboutit! I don't do well making phone calls. That's why texting is so amazing! "Sheri?" "Yes?" "Lunch?" "Sure" "When?" "I'll call you."

One day you're fine and happy and the next minute you're puffed up on steroids, boobless, and all your hair is gone. When your looks have been completely stripped of you - it's going to mess with you. It's messing with me. I know. I know! It appears I'm being rude to my family and friends, but dealing with this. I'll talk to the therapist. She's number 452 on the list of people I need to call. 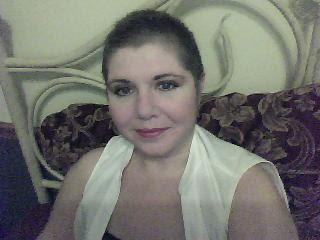 Please take a moment to admire my new hair. Today is the first day I'm going out in public without a hat or scarf on my noggin. I'm a little bit nervous. Oh, sure it's just to the doctor's office, but still - this is a big day for me.

Dr. Young is doing some sort of blood work today. I've long ago stopped paying attention to what the purpose of each appointment is. I wish they'd give big ol peanut butter cookies at the doctor's office. I'd definitely be more excited about each appointment. If you've never tried the peanut butter cookies at Ted's Montana Grill I highly recommend them.

The actual point to this prattling blog is to talk about my hair. And not just the hair on my head either. If you would like to take another moment now to admire the hair on my head, I would be ok with that. Moving on... I'm not sure if it's the excitement of being able to grow back on my body or what, but I'm growing hair in places where there's never been hair before. Might be the freakin menopause. If menopause were a person, I'd punch it in the neck.

There is no excuse for me to be anything but cheerful from here on out. My blogs will be full of sunshine and merriment. This is my fresh clean slate. I need time to think - a blog sans whining about cancer. I've heard they are out there, but can I do it? Best I can do is try.

Think happy! Think happy! Think happy! Ok! My hair is growing back - more white than black now. They say when you go through a traumatic experience it will cause your hair to turn white. Why is that? I sort of think of my hair as alive, and perhaps when the cancer arrived my hair pigment decided it wanted no part of that mess and fled. Can't say that I blame it. I would have done the same thing. Also, the hot flashes have stopped. I haven't had a hot flash in 4 days straight. The mood swings are continuing just fine, thank you. Turns out that's nothing to do with menopause - that's just me.

This is just a preposting on the new blog. For anyone just tuning in and wants to follow my cancer story (you'll laugh, you'll cry ... blah blah blah).. go here: www.trustmeitsnothing.blogspot.com after that, come back here: www.excancergirlgonewild.blogspot.com (you'll laugh, you'll tell your friends, they'll be confused because they didn't go to the first blog first ... blah blah blah.)

I plan to post several times a week, so come back often.
Posted by Sheri at 12:05 PM 3 comments:

Sheri
I started this as a way to help me cope with my fun new disease known as breast cancer. It's also a way for my 5 bazillion family members and friends to follow my daily ups and downs. Keep in mind, I rarely finish anything I start.